How to ensure compliance when recording

Written by Dan Huru
Updated over a week ago

When Meetgeek joins calls, participants are promptly informed that the meeting is being recorded. This saves you the hassle of asking for permission and helps you to remain transparent and compliant with most legislations.

Note: Although recording is transparent, it's a good practice to remind participants verbally. We do not encourage any form of incognito recording software or surveillance. Meeting participants are the only ones who can decide to share meeting content.

Initially, the host needs to admit the bot into the call. So even though Meetgeek will join calls that you don't host, it's a good practice to let the host know.

Once admitted, Meetgeek displays a chat notification to participants, informing them that the meeting is being recorded. The chat message is always visible in the chat history. 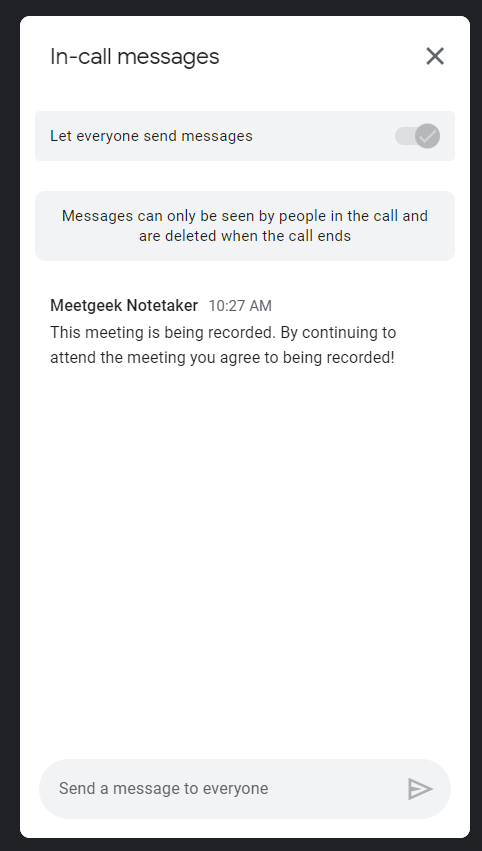 In addition, people will notice Meetgeek as a participant in the call. As long as Meetgeek is there, the call is being recorded. 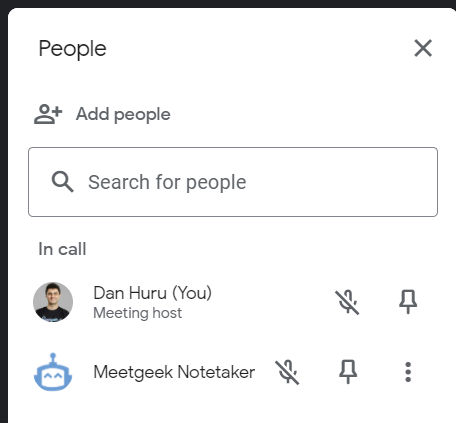 For convenience, please see below information about recording consents in the US and internationally.

In the majority of U.S. states, you'll only need consent from one of the persons participating in a call in order to record it. The party making the call can provide consent. However, approximately 13 states have chosen to require all parties consent in order to record the call and transcribe the call. These states are currently California, Connecticut, Delaware, Florida, Illinois, Maryland, Massachusetts, Michigan, Montana, Nevada, New Hampshire, Pennsylvania, Vermont, and Washington State.

Several laws govern the practice of recording calls in the United Kingdom (U.K.). Unless you can guarantee that the call won't be shared with any third parties and is being recorded to either gather evidence, ensure regulatory compliance, or prevent crime, it's best to think of the U.K. as an "all-parties consent" jurisdiction.

The GDPR and other European regulations generally require consent from all parties on a call for the call to be recorded. This means that the parties should be presented with an affirmative opt-in with a meaningful way to opt out of the recording. GDPR obligations also require a valid and legal reason for recording the call that would allow the information to be collected. You should also check call recording rules in your specific country, as the EU member states have implemented different rules that apply to call recording consent in different contexts.

Under Irish law, to record calls, you must obtain consent, so Ireland joins the U.K. and 13 U.S. states as an "all-parties consent" jurisdiction. Irish law makes clear that the purpose of the recording should be explained in detail, so the parties participating can give informed consent.

Germany is a two-party consent state, meaning call recording without both parties consent, when applicable, is deemed a criminal offense.

Like Ireland, Canada has established a single set of rules for call recording, built into its electronic privacy law (PIPEDA).

Joining the other countries and states mentioned above, Canada has adopted an "all-parties consent" approach: to record a call, you need to obtain informed consent by notifying others on the call (1) that you intend to record the conversation, (2) any purposes the recording will be used for, and (3) that the call may only be recorded with each person's consent.

While this article has chosen to highlight certain countries and jurisdictions above, it's by no means an exhaustive list. We recommend making sure that you always obtain consent if you're in doubt.

Did this answer your question?